Joanne of the PortobelloBookBlog has done me proud here with a lovely review. Thank you so much Joanne, and I’m so pleased you enjoyed it. 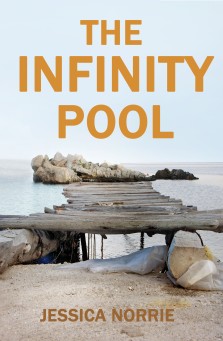 Jessica Norrie wrote a really interesting guest post back in January about the process of seeing her book go from print to an audiobook. You can read this guest post here. At the time she kindly offered me a copy of the book and finally I have got around to reading it!

The Infinity Pool begins with Adrian, director of the Serendipity holiday community, lying badly injured by the side of the pool reflecting that he hadn’t expected to die that day. Rewind one year to 2010 and we meet Adrian, his staff and his guests at Serendipity. Serendipity is one of those places you go to ‘find yourself’ and the guests take part in classes such as writing, painting, and meditation. Part two of the book returns to 2011 where we find the staff trying to cope with Adrian’s mysterious disappearance. Many of the guests are also missing the popular community…

“A book grows according to a subtle and deep-laid plan. At the end, I see what the plan was.” So says Hilary Mantel in her Guardian article “My Working Day” (Review Section, 16/04/16). Hilary Mantel writes with such impeccable research, consistency of tone, and beautifully structured narratives that no-one would believe she doesn’t have an initial plan, except she seems to say so. Ideas come to her, sometimes in a cascade, sometimes sluggishly, sometimes in lucid form, sometimes obscure. She writes them down, easily or in disorder, then over a period of hours or months knits them together, teasing out themes, perfecting characters as she uncovers more clues to their natures, following the narrative flow until she can control and lead it to a final destination of her choosing.

Apologies if I have misinterpreted her (and yet she writes so clearly). Maybe I’m just taking from her article what I want to hear.  For my writing instinct is to protest against the deification of initial planning. These days,  whether teaching children to write (which I’ve done for over three decades) or following adult creative writing courses, I find planning presented as more important than inspiration, characters, themes or ideas, so it becomes an end in itself. “Why aren’t you following your plan?” says a teacher to a child aged six. “Look, on your plan it says the frog turns into a handsome prince, not that a lion came into the jungle and fought a crocodile.” Later I agonise over my own story. “I thought you said the girl would meet an accountant who was unexpectedly interesting, not that she’d sit next to a trumpeter on the tube and get her hair tangled in his valves.”

“But I started writing,” says the six year old, “and I thought a jungle story would be more scary. Lions have claws and frogs don’t.”  How I sympathize, since despite my best efforts I just couldn’t get passionate about the accountant. Then this trumpeter happened to sit next to me and I was blown away.

“Where’s your beginning, your middle and your end, six year-old?”  This, to her, is  clear. In her universe, it’s acceptable for the beginning to be “Once upon a time there was a frog.” The end will be, simply, “The End”, perhaps in bubble writing, and coinciding suspiciously often with the bottom line of the page although not always with the end of a sentence. The middle might be “The lion saw the jungle/ “I went (sic) Macdonald’s/ the princess ate a donut” (free market spelling rather than government approved phonic version). In the voice of Apollinaire or John Lennon this would be considered surreal and/or complete, but the six year demonstrating a stream of consciousness on the page is at fault because none of those elements was in her plan (created with equal pain on some teacher generated template the day before). The bemused child stares at the page, waiting in dull disenchantment for the bell.

And her adult counterpart? “Where’s your three act structure /your inciting incident/your narrative arc/your crisis/your resolution?”  If you have that all mapped out before you start, thunder the manuals, you can finish your novel in a week/a month/three months max. Just join the dots and you’ll finish on time.

These are necessary structural features. But will your characters breathe? Will your plot be original? Will anybody care what you have written and will the tension you sought be gobbled up by the planning monster? Will it make you succeed at first but fail in the end?

Thank you Hilary Mantel, for reminding us that the best writing arrives untidily, even for the best writers, and the author who is truly in charge of her plan is the one who gives it priority only when it’s safe to do so.

I went on a very odd holiday, recommended by a stranger at a party.  I wasn’t sure if I’d enjoyed it, but I returned anyway, four times before I’d had my fill. The setting was fabulous: Greek coastline, fruit trees, pine forests, white towns tumbling to coves and crags, picture postcard pretty, although the beaches had jagged rocks and plagues of sea urchins too small to show up on those same postcards. The accommodation ranged from basic to primitive, but the place was selling a back to nature package and most visitors enjoyed the break from their gadget strewn flats, or their Victorian family homes in need of so many repairs only selling them would solve the problems.

You could attend courses in personal development, yoga, or windsurfing, to name just a few. This was refreshing. At home such courses are often graded by ability or experience level, but here everyone was mixed in: sometimes terrified beginners seeking to achieve personal goals alongside savvy, generally kind old hands who were often roped in as deputy instructors. I became a keen mosaicist, of which more in a later post.

Haphazard creativity sparked a rich selection of evening activities. Guests and staff threw together ideas for our mutual entertainment: someone might lead a ceroc session, guide a star gazing midnight walk, compère an evening of music and poetry or host an anarchic quiz. 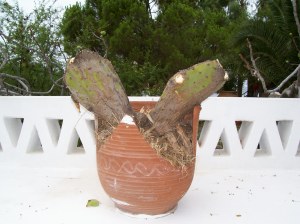 Affairs began, juddered, restarted, and partners changed around.  Everything happened fast, real life rites of passage copied and pasted into a two week time frame. These were not your ordinary holiday romances. They involved lots of deliberate soul searching. Commitment was a heavily used word, as were excitement, passion, betrayal… Can you be betrayed by a one night stand during a holiday romance? Is it fair to accuse somebody of a lack of commitment when you live continents apart and have only known each other since breakfast? The ratio of at least three women to each man added to the competition and inevitably the explosive recriminations of the runners up clashed with the triumphs and the trophies – in the nicest possible, civilised, drunken way, of course.

I thought it was fertile ground for a whodunit. I bought airline tickets for some oddballs I’d invented, added local characters to highlight the contrast between the island’s traditions and its visitors, and installed a state of the art swimming pool to muddy the back to nature ethos. I began to write. The whodunit became more of a whywhodonewhat, contemporary fiction rather than crime. Four years later after many waves and ripples, The Infinity Pool was launched.

Very soon, I shall go downstairs and open a bottle of dry white wine. But first, I need to welcome readers and friends to this “first edition”, not of my new blog because there was never an old one, not of my best blog because to be honest this is a slow process, but, at least, to the blog that has progressed this far.

What will you see here? I hope to blog about writing, mine and other people’s; about reading – how to do it, when and why to do it (these questions sound simple but actually they engender complex debate); about how child readers become adult readers; about translated writing and new writing and classics. Those are areas I know something about.

To cater for other fields, I hope there will be guest posts from friends and colleagues, some already much loved and familiar, some I’ve yet to meet. I intend to post reviews, I hope to host discussions and debates. With luck some of the reviews will be by other people. With luck there will be many and varied viewpoints.

I look forward to meeting you on these pages, and now – it’s time to open that bottle!