I published my first novel innocently, by which I mean I wasn’t fully aware of most rules surrounding fiction writing, as expounded by editorial and marketing experts. So it was only after July 2015 that I encountered the bottomless internet pit of advice for the hoping-to-be-published, the soon-to-be-published, the long-ago-published-now-forgotten, and the almost-certainly-never-to-be-published.

This is what I perceive to be the advice that’s generally offered. It seems that adult writers use too much embellishment. So much of the creative writing advice to adults that I now hear says, simplify. You can have a complicated plot, but it must be clear what’s happening. (Really? – I am habitually accustomed to getting to the end of stories, especially crime, and including those of favourite authors such as Sara Paretsky and Nicci French, with no idea at all what’s going on. The same happens when I watch The Bridge or even Shetland; it’s all part of the crime reading, crime watching experience for me and I rather assumed everyone else was in a muddle too. Understand the plot? Why would you want to do that? The victim doesn’t usually understand – that’s all part of victim-hood, so how better to empathise?)

Simplify the themes, or the message. To that I simply say, why? Most worthwhile messages have complex subtexts and nuances; that’s what makes them interesting. Even among the less salubrious best sellers, there were (allegedly) more than just one or two shades of grey for a reason.

Simplify the setting. Take short cuts and sketch locations sparingly. I disagree. I want my setting to be lush, detailed, part visible, part undergrowth. But most advice says, don’t waste the reader’s time on minute description because another thing you must do is: –

Simplify the language. Ah. There I (sometimes) (again) have another problem. I love language, I love its richness, its quirks and variations. For example, I don’t want always to  use “said” as was advised by Elmore Leonard and often elsewhere, because if nobody ever deviates from “said”, then “expostulate”, “murmur” , “ponti 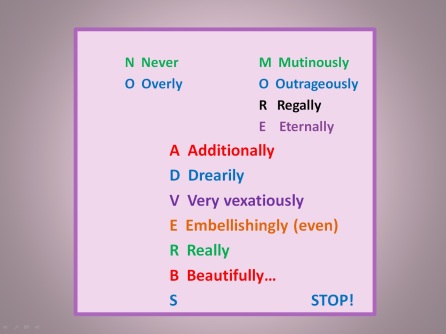 ficate” and “screech” may one day become extinct. Language is littered with dodos, spottable only if you take your magnifying glass and comb through Dickens. And I certainly don’t want to be a party to endangering any more linguistic species, of which some of the most vulnerable are adverbs. The purists don’t like ‘em, apparently. They are to be locked in a cupboard, stood in a corner, left unfed and unnoticed until they wither away. Their crimes include lengthening the sentence (well why not, occasionally – does it harm our waning 21st century concentration spans to be challenged periodically and when it’s relevant?) Another accusation is that adverbs can cause tautology – for example, why choose “she murmured almost soundlessly” (ah, but see my previous point. Maybe we should compromise on this one.) Thirdly, adverbs offend the “show not tell” rule. ‘ “Where are you off to in that lavish ball gown, Cinders?” drawled Rupert lasciviously’ won’t do when you could say: ‘Rupert leered. “Where are you off to…” etc.’ (We’ll draw a veil over the rest.) But lasciviously has such a slurping, drooling, creepy all-men-are-bastards sound packed carelessly into a single word – who’d want to lose the  onomatopoeic  advantages of that?

A visiting friend maliciously seized his opportunity when I suggested this article, picked up my own novel and  read out at random: “…stated Dave portentously” / “Magda adroitly seized the chance…” / “they actually like showering with cold water…”  “They’re all from the same page,” my friend sniggered triumphantly. Well, perhaps I did overdo them somewhat. Like any other author, I have both weaknesses to improve and writing idols whose practice is far closer to perfection than mine, so I decided to check what they do.

From  page 280 of my current read, Elizabeth Jane Howard’s The Long View, published by Picador :  “…(she) looked faintly surprised.” / “…she was incredulously still.” /”He could barely hear…”/”He kissed her sensitively…” / “He had suddenly a feeling of power and joy” / “…her violently beating heart.” I think most of them work for the characters in question, though the last is surprisingly Mills & Boonish.

Sticking with my style gurus, I consulted Anita Brooker, Hotel du Lac, Jonathan Cape edition  pp 69-70: “…she poured it out  largely and carelessly, …and almost immediately lit an immensely long cigarette…”. Who’d have thought it?

Then I tried a modern children’s classic. JK Rowling in Harry Potter and the Goblet of Fire, Bloomsbury p 190 overdoes it slightly with “the third spider scuttled frantically” and “it started to scuttle frantically” twice in four lines, but perhaps we should blame the editors for that. Moving swiftly on, only six lines later, “instantaneously the spider rolled over onto its back, unmarked but unmistakably dead”.

Finally, I’ll go populist. On p 186 of Caitlin Moran’s How to Build a Girl (Ebury Press) she’s in a pub, “expansively medicined  on the MD 20/20” the obscurity of which is a lesson to anyone who goes through their daughter’s books on a random search for examples to back up a blog point. Meanwhile Duck the mule, on p 39 of Michael Punke’s The Revenant, (Borough Press) is “firmly stuck in the mud. It ultimately took half the brigade to pull her out.” 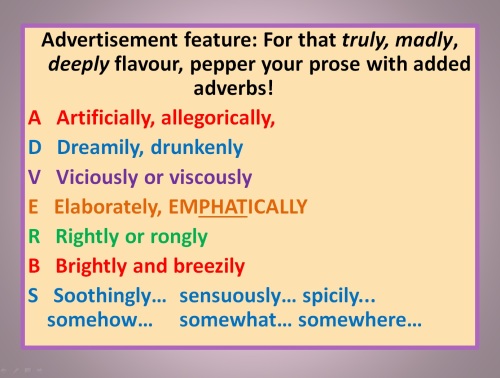 So what do I think now I’ve paraded some evidence? It seems that adverbs themselves and their usage, like all parts of speech, comprise the good, the bad and the ugly. But if the publishing powers that be – who are usually choosy enough already about what they’ll invest in, after all – keep reiterating their anti-adverbial campaign, I’ll simply quote Gone with the Wind – although one of the most effective adverbs of all time  was added to the film script and doesn’t appear in the original book.

Frankly my dear, I don’t give a damn.

(But if you do, there’s a fuller guide, wittily written and giving very clear pros and cons, that I discovered here.)

9 thoughts on “The day the adverb (nearly) died”