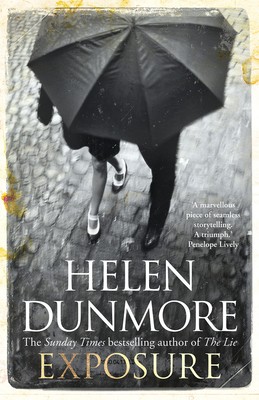 I’ve admired Helen Dunmore for a long time, for the lucidity and fluency of her writing. Her deceptively simple style can be read so easily that the story seeps effortlessly into your mind and you gather detail about the characters and settings almost incidentally. Then a particularly beautiful sentence stops you in your tracks and you begin to appreciate the poetry of what you are reading as well. “Each time the wind slams against the glass, her nerves crisp, but she works on calmly.” We’ve all experienced wind slamming and our nerves crisping at a sudden noise, but few of us can express it so economically. Only once in the whole book does she(or her editor) go wrong and the reason this jars so much is because of the overall perfection: “Julian Clowde’s eyes were like lizard’s.”
This story resonated for me because I am the age of the youngest child in the story; I too grew up in North London; my friends were the children of Jewish refugees, and the Cold War hung threatening in the background. We played English vs Germans in the school playground; my parents had been on CND marches; there was talk on the news and in the fiction I read later of spies, references that I didn’t understand (and still usually don’t) and that at the time were menacing and sinister. As the years pass those stories have become cartoonish, but in the 1960s spy activity represented the interface between civilisation and the Eastern Bloc, with nuclear annihilation the penalty if the delicate balance were to be disturbed.
Helen Dunmore writes of spies and suspicion, but without bringing in too much minutiae. The document and photographs to which the characters’ fate is hooked are not described in detail. Their bearing on world events, if any, is not clarified at all. That fits too, with my general incomprehension of espionage. What is clear is the effect on ordinary lives when they happen to become caught up: domesticity, not the world stage, is under threat here: home comforts, personal security, well being. Any child of the 60s can relate to inadequate heating in a Victorian villa and then a seaside cottage, a temperamental coal boiler and single glazing that rattles. More positively, any teacher (as I now am and as Lily is in the book) can dream with nostalgia of paperwork which went no further than a pile of marking, and of a time when junior school children walked home from school in sole charge of their younger siblings. This book abounds with such details that pinpoint an era as definitively as any set of dates.
Exposure is a clever title, for the exposure here gives another clear glimpse of the period, a time when homosexuality was as disgraceful, or more so, than betraying your country. Youthful sexual experiment that can now shrugged off even by top politicians, was then a criminal offence, individuals, households, governments could be brought down by the scandal. My parents had gay friends who lived openly together: it took many years for me to understand how brave that was. Helen Dunmore and her characters quote Oscar Wilde to haunting effect, before some of them are exposed in a different sense, on the freezing North Kent coast, scrabbling for sea coal at low tide. Throughout the book, objects, feelings, and facts are buried, consciously or subconsciously, for mistaken or sensible reasons, and the fear is that they will be exposed like the roll of film on the crucial Minox camera. None of this would be so necessary in a different society or a different story.
Dunmore references “The Railway Children” too, in an unlikely literary juxtaposition that works brilliantly. This time the children know a little more, the country dwelling and the train are not so friendly, the mother seen as more vulnerable and not always right. But the repeated reminder of a children’s book (in fact two because Dunmore also refers to another classic that I loved as a child, “The Children who lived in a Barn” by Eleanor Graham) is comforting for the reader: children’s stories involve passing through trials to a happy ending, so maybe everything will turn out fine for the Callington family too. After all, “No one will come at this hour, and those are only shadows under the lamp posts.”
It’s for the reader to judge the happiness, actual, potential, fragile or disguised of the ending, or whether a sequel would spell doom. This is real life in the way that only a cleverly constructed fiction can present it, and the consequences of hidden events may not be so simple as they were for the original Railway Children.

7 thoughts on “Review of “Exposure” by Helen Dunmore”