Some of you have said you’re impatient  for more news of my heroine, but she had to sit in the waiting room for a few days last week while I went on a trip of my own. Reviewing a guide to Shakespeare recently reminded me he’d rather left my stage, having played a lead role at other times.So off we went to Stratford-upon-Avon (proofreader’s nightmare, that, since the district council differ from the official tourist website and call it Stratford-on-Avon. And I only set out to check if it has hyphens. Still, inconsistent usage is in the Shakespearian tradition.)

We did things in the right chronological order. This was inadvertent, but I do recommend it to give a sense of his life: childhood, education, maturity, creativity and legacy. It’s all easily walkable. Shakespeare’s birthplace has been much tarted up lately – (whoever knew they had an early form of wallpaper? It’s oilcloth, designed to keep out draughts.) We moved on to his school, then to New Place which he bought as a successful playwright, next to his daughter’s home Hall’s Croft, and finally to an acclaimed production of “The Tempest“.

Actors are on hand at each property: one played Shylock. His most famous speech should be played on a loop in these times of Trumpian intolerance and Brexit braggadaccio (substitute any faith/orientation/race /characteristic you like):

All the Shakespeare properties were fascinating in different ways, but as a retired teacher (I can’t say that word often enough!) I was most struck by Shakespeare’s school. When last summer I blogged If Shakespeare had sat SATs, I didn’t know I was soon to sit where he sat. Warning: exclamation mark deluge ahead. It’s still part of a school! In the morning before the building opens to visitors, King Edward VI Grammar School uses it for registration and sixth form assembly! So supposing your son passed the 11+ (it’s a state school but fair to say, not that easy to get into) or your daughter was in the sixth form, s/he could learn/daydream/mess about* in the very same classroom as Shakespeare! Sitting on replica benches, at right angles to the teacher as he would have done, and as K.E.S students do every morning, we watched a video in which boys from the school play a scene showing Shakespeare and his classmates learning to translate Latin poetry. It was humorous, instructive, evocative. I can’t get over the clever obviousness of using Stratford schoolboys to dramatize the schooldays of their dramatist old boy. I bet the Drama teachers there don’t have to worry about their department being axed. 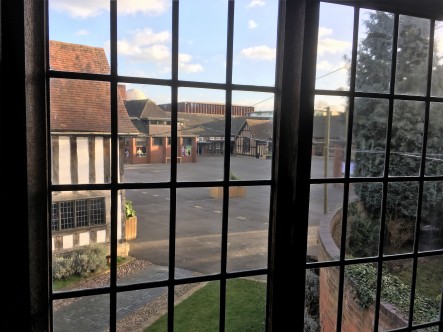 …just one wing of the existing school

Another actor, the schoolmaster, offered to test our Latin and despite my partner’s Classics degrees, he declined. He’d had no reason to return to a classroom since his own school days, and found himself fearful of possible ridicule or the consequences of wrongdoing. My son and his father – a left hander who’d been made to work with the “right” hand at primary school – had the same reaction when we went to the Victorian Ragged School in Bow, London. Such fear is strong enough in children to remain with them even as successful adults, and as teachers we should always remember it. (Oh, but I’ve just remembered I’m retired. Hooray!) 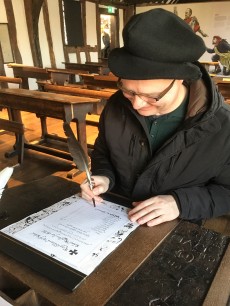 In the replica Georgian classroom next door, we wrote with a quill pen and tried on a scholar’s cap. A gentler volunteer praised our efforts and we quietly glowed. (That’s how I’d do it. If I wasn’t retired.) There is a more information about these historic school buildings here. It’s a long time since the stage of my career when I taught Shakespeare to secondary school pupils, but I would have used it to help bring him alive. (Too late now: I’m reti….)

These museums didn’t feel like museums, they felt like homes and workplaces. (I learnt a lot about glove manufacture too – John Shakespeare was a glover.) I think it was because such care was taken with the special effects. Shakespeare himself used the latest special effects whenever he could, as did the RSC at The Tempest that night. Arial really was a magical sprite, his avatar seen and heard simultaneously on several different parts of the set. Thus the isle was indeed full of voices. Yet at the very end, the effects bonanza quietened and Simon Russell Beale held the audience more simply, still and alone on the stage, letting the words cast their magic in his beautiful, diffident baritone. To a younger audience than in London, I noticed.

Do go to Stratford if you get the chance, out of season if you can (did I mention I was r……?). I may even take my heroine if she’s not too busy fighting to remain in the UK.

*I may be maligning them here. I never saw such well behaved home time bus queues as in Stratford.

12 thoughts on “In the same class as Shakespeare”