Shade and sun, noise and…not much silence here in London where we still have intermittent NOISE unless I scream at the builders through the walls. For me the sounds were more harmonious last week in Barcelona, so here’s a post about what I’ve heard and seen there, over the years.

I first visited Barcelona in November 1979 with a student friend. Our filthy train rumbled down from Paris for ten hours. We dozed upright and stepped over recumbent bodies in the aisle to get to the unspeakable loo. The track gauge changed at the border so we had to take another even worse train, arriving sleepless with grit filled eyes. We found a room in a narrow alley off the Ramblas, not because it was billed as “quaint” (it wasn’t, then), but because it was cheap. It looked onto a high blank wall about six metres away and the streets were quiet. I wanted to practise my Spanish, which G didn’t speak, but we soon found it was better if he did the talking. The only other females around were nuns and prostitutes, and no-one seemed ready to engage in the friendly dialogues suggested by my phrasebook. 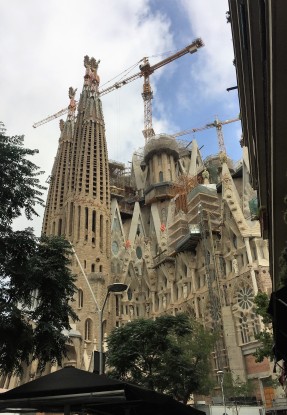 I don’t remember hearing Catalan or English either: people simply didn’t speak in our presence. Probably, under Franco, they’d lost the habit of talking in front of strangers. Their mother tongue, after all, was banned. It rained. The Sagrada Familia was forbidding and silent – no-one was working or visiting under the four completed towers and much of the roof was open to the gloomy sky. There was little money available for the project. Franco had only been dead four years and Catalonia had suffered as much if not more than the rest of Spain. Barcelona was poor, dirty, dreary and dark. We escaped to Sitges, even then a cheerful, bouncy little town with a sunny beach that defied the season.

My next trip was sometime around 2004.  What a difference! Spain had (apparently) shrugged off Franco. The 1992 Olympics had regenerated Barcelona, cleaned up its beaches, replanted its parks. The shops were full and colourful, the people stylish. You could still wander around the “temple” without a guide, but parts were taped off with stonemasons chipping away behind them. The human statues in the Ramblas only jogged into movement when the adjacent ball dribbling exhibition hit them accidentally (or was it?) I watched Almodovar’s La Mala Educación which had just come out, in a showing starting at 10pm and then we went to eat and then the sparkling metro was still running to get me home. Watch out for your purse by the bullring, warned Señora Herrero, my hostess, but I felt quite safe.

I returned with my son and his father in 2005. I wanted to see the Palau de la Música, built to celebrate both Catalan and international musical traditions and an Art Nouveau sensation. I wanted to visit the Picasso Museum, where you can see his dashing, respectful variations on Velasquez’s Las Meninas. I wanted to congratulate myself again on how much written Catalan I could understand – by now all signs were bilingual and if you can read French, Spanish or Latin you can decipher Catalan. Robert and his dad went to worship at Camp Nou, and back we all went to the Sagrada Familia. Not much had changed in a year. Health and safety awareness had produced a few more hoardings so work was audible but harder to watch. (Why am I moaning about the builders next door? At least it’s not an unfinished cathedral started 90 years ago.) 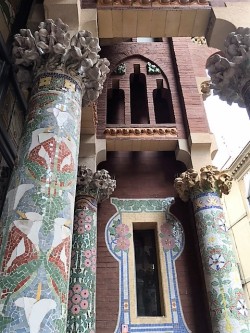 We went again last week. I’ve written before about singing, and this trip was Run by Singers giving us the opportunity to sing in the temple! And goodness how it’s come on (the temple, not my singing). The midpoint of construction was reached in 2010 and it’s hoped to finish in 2026, the anniversary of Gaudi’s death (although the pious architect famously said “my client [God] isn’t in a hurry”). There are now eight towers completed of the projected eighteen. The roof is finished, and the stained glass creates glorious changing patterns in the nave, while the internal pillars rise in the shapes of palm trees to a forest canopy of intricate stone. I was relieved the choir stalls are not yet finished, as they’re going to be about 15 vertiginous metres up on three sides, with a screen so that all 1400 potential singers can see the conductor. Meanwhile we sang in a roped off space in the nave and some tourists were good enough to stop and listen. In the evening, we gave a charity concert at an enchanting little theatre in the nearby town of Vilassar. I wonder how many UK towns can boast such a charming performance space? 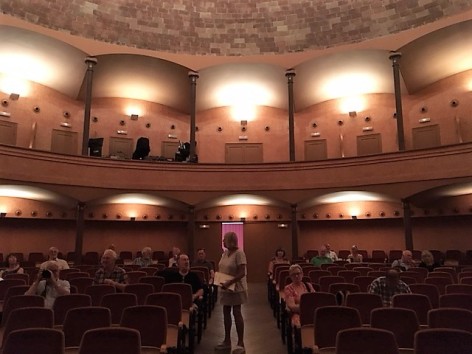 The pretty local theatre in Vilassar

There was a little time for sightseeing. The Park Guëll was scorching, and to me had changed only in that it was much more crowded. The mosaics that aren’t mosaics (they’re “trincados” and you can try making one yourself next time you smash a plate) were still delightful. I suffered real vertigo on the roof of La Pedrera, but enjoyed the apartment inside and gazpacho at their cafe. The bullring has become a shopping centre since Barcelona banned bullfighting – bravo! But the cherry on the cake was to return to the Palau. This time, the guided tour was much less overtly political, less focussed on Catalan pride and the need to protect and nurture their culture. The glowing Palau spoke for itself, as now do the people, and the tour included 20 minutes of beautifully played Chopin, Liszt, and Mozart. Next time, we must surely sing there! 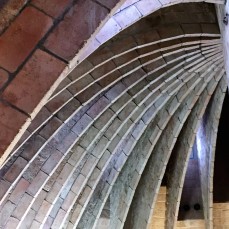 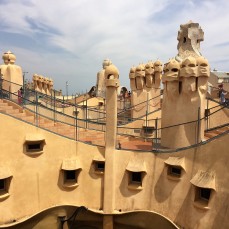 I’d downloaded books set in the region, referring as ever to the TripFiction website for my choices. But we were too busy. I haven’t touched them. All I can recommend is those I’d read already. George Orwell’s Homage to Catalonia, about his experiences during the Spanish Civil war, can’t be bettered as an explanation of why 43 years later the Barcelona I saw was still so downtrodden and sinister. The novels of Carlos Ruiz Zafón are mostly set there. I read them in Spanish, in order to practice, which means I’m vague about the content. There were lots of alleyways, dark passages, dusty booksellers and libraries, abandoned railways and gardens with wrought iron gates, mysterious young women, wrinkled grandparents with jewels and sadness, shadows and secrets but the plots eluded me.

Depending on NOISE, posts over the summer will be intermittent. Maybe I’ll reblog something of someone else’s instead, now I’ve discovered how. Or maybe I’ll leave you all in blissful silence, to browse through some photographs – this time, it was harder than ever to know what to leave out.