The blog has been silent for three weeks, but my life has not. Between ongoing neighbour noise and travel, there was a week of beautiful sounds at Dartington International Summer School and Festival. I blogged about Dartington last year when Monteverdi and Marina Warner were the main dishes on my menu and we were surrounded by weird medieval and renaissance instruments: sackbutts, theorbos, dulcimers and cornets. This year we chose strings week. Participating as singers ourselves, we could only listen, watch and admire those who are able to play.

Never have I seen so many cellos. As a cello case blocked me from the scrambled eggs, Adrian Brendel murmured, “So sorry – perhaps I shouldn’t have brought it into breakfast.” Cellos tuned, cellos bowed, cellos plucked, occasionally cellos rapped percussively. Cellos walking around apparently of their own momentum, when the player isn’t tall; cellos grouped in amiable conversation; cellos as footrests; sad cellos abandoned.  Baroque cellos, modern cellos, imaginary cellos. There must have been violins too – the Heath Quartet were in residence and opened the week with a stunning concert – there were certainly  violas, and the eagle eared might discern the distant rumble of a rare double bass. 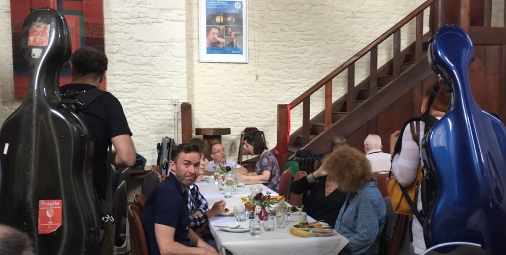 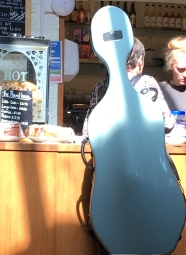 …and stop for coffee

My partner and I sing with a respectable community choir (Hackney Singers). We can “read” music though with less speed and processing power than we read words, have reasonably good pitch and the vocal muscle to manhandle a whole Beethoven Mass between breakfast and coffee. Our friends attend our London concerts if we buy them enough drinks. But at Dartington we are privileged to mix with world class musicians: we listen, awed and moved, to up to three concerts a night played only a few feet away by household names. Then on Friday night they pay us the compliment of coming to hear us! What we’d give at Hackney to have international stars in the audience, the likes of Emma Kirkby, Joanna MacGregor the pianist and director, or the stars of tomorrow like Stephanie Wake-Edwards who sang the alto solos in our mass or Isata Kanneh-Mason on piano. Over the weeks there’s a wide mix of genres represented, so Martin Carthy comes for folk workshops, Andy Sheppard for jazz, and Adriano Adewale brings Brazilian rhythms.

We rehearsed our mass en masse with George Vass, who was also conducting the Piano Concerto Competition and also conducting the production of Sweeney Todd while imparting the wit and wisdom of a lifetime in music. We triumphed (eventually, thanks to Gavin Roberts’ patience) over the German of Brahms and Schubert in the smaller Chamber Choir. When not rehearsing, we could wander into a masterclass: I chose Adrian Brendel’s but Pascal Roget was there too, and a piano duet class, and a vocal class. So I now know something about cello technique (keep the shoulder loose and play with the whole arm, not unlike the tennis commentator’s advice during the New York Open last night). I’ve seen the cello played so many ways by the same and different people: sitting back upright, calm and spiritual for the meditative mathematics of Bach, or embracing it with legs and arms curving forward to pluck deep bass notes, lips almost touching the neck like a singer with a microphone. It’s quite erotic.

…and are played quietly in the gardens

(But music ain’t all spiritual or sexy : ever noticed how much saliva gets emptied onto the floor by a French horn and how a conductor sweats?)

Particular highlights this year? Alfred Brendel talking about Schubert, and his own musical career, moving when discussing his own choices of what and how to play, wise about young musicians today (“don’t practise so much”), quick with a witty putdown if an audience/interviewer question didn’t suit him.

Second highlight: Joanna MacGregor’s piano concerto masterclasses. The student soloist on one Steinway, she on the other, throwing herself about with huge energy to play all the orchestral parts on the other. There’s a surprisingly practical element to  her teaching: apparently concerto soloists rarely get the chance to practise with the orchestra before the performance (not so unlike the life of the amateur choir then) and she was full of hints. “If you peer under the piano lid at this point, you should be able to see the lower strings to help you keep in touch” / “this bit’s tricky for the conductor so just give him/her a hint, perhaps a quick G flat just to show what your intention is” / “try coming down onto the note from higher up, it will make more sound and be less tiring for you” / “just go with the flow for a rest, this is the woodwind lead, not yours”. Fascinating. I shall never hear Gershwin or Rachmaninov the same way again, having heard them on two Steinways as she conducted, advised, played, joked, demonstrated and most importantly, encouraged. 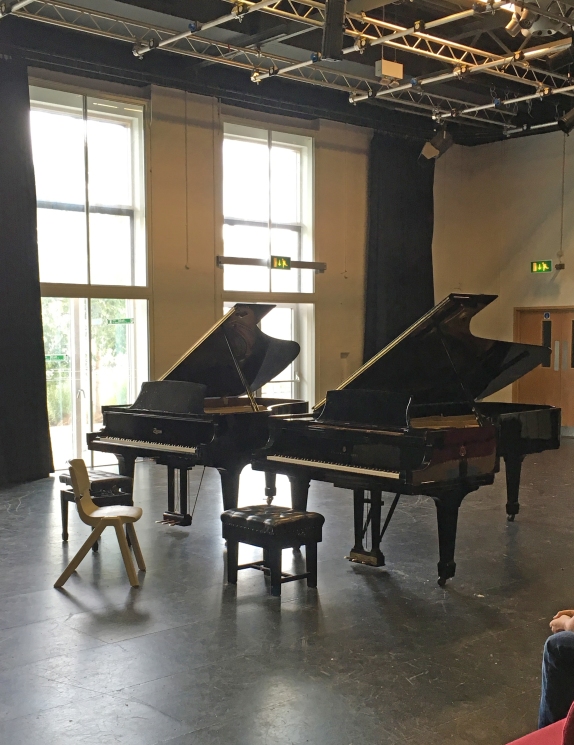 Third highlight – Brazilian rhythms in the bar on the last night, top singers and musicians taking impro spots as we all clapped, sang and percussed along. Is to percuss a verb? It is now. If a mainly (but not all) classical music summer school sounds precious or exclusive, think again. This one rocked!

Last highlights? Delicious breakfast mushrooms and grazing on mulberries from the tree in the famous Dartington gardens. We’ll be back next year, for the St Matthew Passion – unless we go for Early Music Week … or The Creation… or the Verdi Requiem and Kiss Me Kate… choices, choices.