I found this book game on Janet Emson’s blog Fromfirstpagetolast.*  The idea is to start with a book and then see what other book it leads to and so on for six books. They don’t all have to be linked, only each subsequent one. 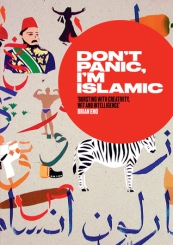 Lying on my coffee table is Don’t Panic I’m Islamic. I’d heard of this first on Linda Hill‘s blog. Shortly afterwards, I was visiting my son at Goldsmiths, and came across “The Word” bookshop, New Cross Road. I took him inside to show him the joy of browsing in an independent bookshop – his politics are admirable but he doesn’t read enough books. Immediately, in this small one room shop, I found several things I wanted to buy. Yet in Waterstones I frequently come out empty handed, bemused by the vast choice…Has anyone else found this? I believe there’s a theory about it.

Anyway, Don’t Panic, I’m Islamic… It belongs on the coffee table (or in the loo) because it’s a book to dip into. Very funny, in parts. Sad in others, cheeky, angry too. There are poems, cartoons, colouring pages and paintings as well as essays, commissioned in response to President Trump’s travel ban on Muslims. Most contributors are Muslim, though I’m not sure about Carol Ann Duffy or Chris Riddell. My favourite essay was instructions on how to get through US immigration if you’re a gay mixed race man who’s visited Lebanon and Libya that year (the successful strategy will surprise you). It wasn’t the only article on being Muslim and gay, and it struck chords with Queer and Catholic that I reviewed recently. The Word bookshop didn’t have Don’t Panic... (small shops can’t stock everything) but they ordered it which was a good ruse for getting Rob back in there to pick it up for me. 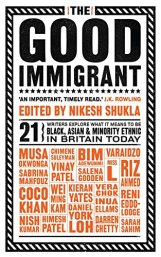 The bookshop assistant (owner?) and I chatted about recent lively, polemical books as I placed the order, which reminded me to ask for Attack of the 50ft Women, which I want to give my son for Christmas. (I think it will be a surprise: he doesn’t read my blog. If it isn’t a surprise, this description of how/why women are STILL not truly equal will fit well with his sociology/media/critical theory/history courses anyway.) 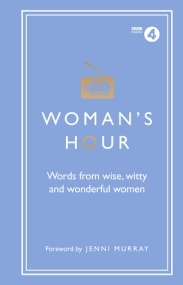 As the Sunday Express review said, “Buy it for yourself, your husband or partner. Most importantly, buy it for your children.” But much as I love them, it’s not out in the cheaper paperback until January – so I browsed other books on what I assume was the minorities/women’s table, and found Words from Wise, Witty and Wonderful Women, a compendium of extracts from Woman’s Hour interviews over the past 70 years. I can’t tell you anything about it, except that it’s another dip-into coffee table/loo book, because on the way home I remembered my friend’s birthday, stopped for paper, sellotape and a card, and took it to her. (There was something cosy and appropriate about being saved from forgetting to buy a birthday present by Woman’s Hour.)

The same display table yielded Rachel Cusk’s Transit, which I’ve already written about at admiring length here, and the paperback of Jane Austen, the Secret Radical. When I got home I realised I’d been given (and not yet read) the hardback last Christmas, so Oxfam did well out of me that day too. I’ve started reading it today, and so far I’m thinking: blimey, this is not the Jane Austen of wet shirted Mr Darcy or gently clopping pony traps! Freud must be rubbing his hands vigorously in his grave (at least I hope it’s his hands) at how Helena Kelly interprets the thoughts of Austen’s Catherine Morland. The Women’s Equality Party could quote her in their manifesto; and Momentum members would enjoy Kelly’s interpretation of Austen’s views on wealth distribution.

So there they are: six – no, dammit, seven – books, tenuously linked. Who’d have thought reading (without panicking) about Islamic drag queens and a Beirut bus driver’s thoughts on Donald Trump’s hair, could lead to Jane Austen?

My choices suggest a penchant for political, radical, left of centre sociology. They make me look like a great reader of nonfiction, but usually I read novels. So I’m tempted to start the game again, with one I read recently, Sebastian Barry’s Days Without End. If any of you have read that, I wonder where it led you? I bet you can’t guess where it took me…but I’ll leave that for a future blog post.

*Janet Emson found the game on three other blogs. If we add mine, that makes five blogs. Would you like to add yours, and then we’ll have six (or more) book blogs separated only by a link, all playing Six Degrees of Separation with the books they’re reading! What would your six (or more) books be?

5 thoughts on “Six degrees of separation”