Some writers are fascinated by football (Albert Camus, Julian Barnes, Nick Hornby). For others the temptation is tennis (Vladimir Nabokov, Martin Amis, David Foster Wallace – described here in the Guardian). I’m an unseeded member of the second group. The grass court tennis season is underway! And each match tells a story.

Where Foster Wallace loved the geometry of the court, and could manipulate intelligent victories through mathematical strategies, as a very poor player and mathematician I’m more attracted by the structure of the narrative. Even the language is the same – where writers have three act or five act structures, in tennis three or five sets build from an introductory warm up through a steady start to maximum tension at the finale of each. A perfectly crafted two set victory is  a short story, polished in itself but with glimpses of many layered possibilities. A five set titanic battle is the War and Peace of the court: adversaries counter, bludgeon, outwit each other, decimate lovingly nurtured territory with their scurries and stampedes, proceed fast or painfully to the final match point and strut the grass in triumphant panache. The boundaries of the court contain the action within strict conventions which players must find ever new ways to exploit. Our short or long chapters translate into their love games or those with multiple deuces; the tie-break’s a mid point climax, and the final set swift and clinical or an epic struggle with an abrupt denouement. The scoring system is in itself an attractive narrative structure: what spectator hasn’t played with the maths of games won and lost, as a reader doodles in the margin? 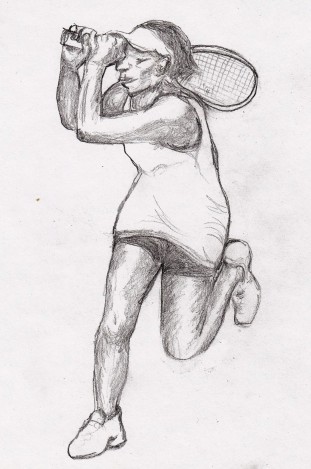 Tennis has character arcs too. Whether grumpy, cheerful, languorous, spoilt, gay, straight, multilingual, corrupt or joyous, players all start a match wanting to win (we assume). They deploy their individual armouries – a thumping serve, backspin and topspin, devious lobs or an emphatic smash – to gain the upper hand. They may start at a  disadvantage or pride may come before a fall. The exhilaration of an ace swerves into a spate of double faults: they crow and they mope and they skid and recover. Sometimes they understand what’s happening to them, or they’re disbelieving, of the umpire, of the gods, of themselves. Through their moments of inspiration, exhaustion, disillusionment, calm, the spectators greedily lament their weaknesses and salute their highs, agog to read the next episode.

What a cast! There are stars and character actors, heavyweights and also-rans, newcomers and clowns, the modish and classic, the familiar and outlandish. Each has a back story to guess at and dig out. Some become more fascinating and complex with time; others should have been cut from the plot long ago. The post match interviews aren’t very illuminating (bland platitudes, massive overuse of the word “unbelievable”) but then that’s not what the players are there for. Their gifts are physical, mathematical, strategic and emotional and they tell their stories not through words but actions: tics, triumphs and all.

I got a bit stuck myself here. But – C’mon! Regroup, and off we go again:

Tennis makes clever use of the apparently trivial the same way writers use small details to embellish their stories. Check out the perfect manicures and classy French plaits. The number of variations on a simple white tennis dress fashion designers can achieve is nothing short of remarkable (almost nothing and short being the operative words). This year graceful diaphanous tunics, half Greek goddess, half baby doll pyjama are a foil to the toned muscular aggression they just about cover.  How do some of these structures stay in place? In this context, the woman who wears shorts is making a massive statement. The men too have achieved multiple variations on a simple outfit, from the wincingly tight tailoring of the 1970s through Rafa’s early pirate style to the drawstring comfort of today. Who needs adjectives when you can delineate a character just by dressing her in Ginny Hilfiger?

The umpire is the main supporting cast member, with the ball boys and girls more appealing extras than the portly line judges whose insignificant looks belie the influence of their decisions. Recently Hawkeye has taken on increasing importance, capricious Zeus of the mortal world. The coaches chew and mouth intensities. And of course the crowd can take over with a Mexican wave or the spotlight may fall on a dexterous individual catching a wayward ball. But what of the matches with no crowd, no Hawkeye, no ball girls? Our heroes and heroines struggle on with or without us, circumnavigating the globe, accruing debt and displacement, age, injuries and disappointment. There’s an epic novel in that alone.

Before I leave the court, I’ll add that I’ve been experimenting with ways to illustrate my blog posts. Unseeded as a writer, I’m even further down the rankings as an illustrator, so I’ll award a (notional) trophy to anyone who can identify the subject of my silhouettes and drawing. Meanwhile if you want to see another match, Trip Fiction has a pretty good list of tennis related novels. Thank you for watching.

9 thoughts on “Serving a narrative ace”