This writing blog got diverted and may seem more like a travel blog, so let me, Japanese fashion, impose some order. (Travelling followers picked up recently, please do stay on board: I think our interests coincide.) Hiroshima was so striking I wanted to deal with it first, but now back to what I read to complement my trip.

Why did I go to Japan? My fascination arose from childhood, and a book called Miss Happiness and Miss Flower by Rumer Godden. A small girl receives a present of two Japanese dolls, and her cousin models a house for them to live in.

Of course it’s dated now. Girls may design and work with wood as much as boys; children, sadly, no longer go to the high street by themselves to find information at the bookshop (so few local bookshops remain, for one thing). But nevertheless it was a delight to reread, thirty or more years later, the night before leaving for Japan.

Rumer Godden deals, with a light touch, on culture shock and homesickness and efforts by both sides to integrate. The children Nona and Tom understand the dolls need a home different from British homes, where the walls slide and discrete areas may be screened or opened up according to temporary considerations. Everything must be polite and ordered, and there is beauty in small, humble moments – one flower in a tiny vase, a scrap of silk for a pillow. The dolls have very human characteristics; Miss Happiness is optimistic and can accept hardship;  Miss Flower is nervous, can’t believe a foreigner can understand her and is so grateful and gracious when the foreigner attempts to do so. In a bonus for those with a talent for carpentry, the book includes instructions on how to make a Japanese doll’s house.

Dolls and puppets are important in Japanese culture, and feature in the next novel I read. Junichiro Tanizaki is a classic Japanese author, and Some Prefer Nettles was published in 1928. I returned to Tanizaki after another absence of thirty years, having as a teenager adored his epic The Makioka Sisters, about a family of sisters living in Osaka (It’s comparable, perhaps, with Lorca’s House of Bernarda Alba, Chekhov’s Three Sisters and any number of green spined Virago Modern Classics. Or even Jane Austen). 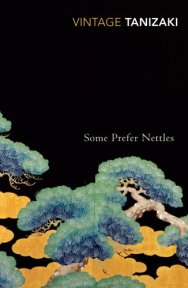 I wasn’t disappointed. Here again was the clear prose; the economical, poetic images conveying in one line as much as a page of Western description; psychology rendered through gestures, clothing, or choices of food and drink. Tanizaki’s characters think carefully about the design of every object they use, in order to enhance the experience in anticipation, during use, and and in memory. It’s a centuries old Japanese trait that continues today- think of Japanese technology, or think of a Zen garden.

In Some Prefer Nettles, a couple are preparing for divorce. There is no animosity between Kaname and Misako, they are simply tired of each other, but they have a child and an elderly father to consider. And so they proceed with care, with resignation, almost hoping to be denied the pleasure they seek, if it will help diminish the shock to the order of things. Meanwhile there are doll festivals and puppet theatre outings in which their situation is reflected through age old Japanese culture. (The puppets are life size and operated by up to three puppet masters at a time: I saw the one below at the theatre in Kyoto.)

The husband, Kaname, was brought up in old Tokyo “before the earthquake” (of 1923) and harks increasingly towards tradition; the wife seeks modernity but remains adept at selecting his kimonos and arranging  flowers for the shrine. “He looked down on her, a sort of mute regret rising in him, without fear of meeting her eyes…..The early cherries were just coming into bloom.” It’s a beautiful, elegiac portrait of a society and a marriage, with a surprising number of echos for the contemporary Western reader. 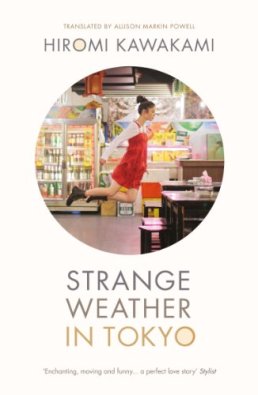 I considered reading Murakami, having found the same simple, limpid prose quality in Norwegian Wood, but felt I should explore a wider range of Japanese novelists and discovered Strange Weather in Tokyo by Hiromi Kawakami. Where Tanizaki told a story of modern marriage in a traditional society, this book, set in contemporary Tokyo, tells of timeless romance under modern conditions. A youngish woman meets her old teacher by chance, and he’s now retired and a widower. As with Tanizaki, you can open any page at random and be sure of finding elegiac, gentle prose, a yearning quality: the teacher’s name is Sensei and the narrator murmurs and repeats it just for the joy in the sound of the name. There’s the design commitment again: practical details investing everyday items with a touch of poetry. “The hot spiciness of the crackers really did go quite well with saké…I heard a faint chirping and then the sound of the leaves on the branches rustling for a moment, and then it was quiet again.” I suspect this simple beauty is a quality of the Japanese language, or it may be something that happens in the interface when Japanese is translated into English. But both novels – in which not a huge amount happens – are immensely clear, readable, universal and moving despite the significant cultural differences between us.

I read these two novels on my return. While I was in Japan, I read Motions and Moments, the third essay collection by Michael Pronko, an American professor who has made his home in Tokyo. At first I found these illuminating: as we moved around Tokyo I recognised quirks that he (affectionately) identifies. I was helped to understand certain customs through his intermediary insights; I enjoyed his descriptions of Japanese gardening (they use tiny secateurs like nail scissors to clip their shrubs with minute precision) and understood what he meant by getting lost in Tokyo “vertically as well as horizontally”. The first two parts of the book (Surfaces and Miniatures) were well written, witty and informative. Part 3, Constructs, could have used some editorial help with, er, construction (and I’m aware he acknowledges the help of Newsweek editors at the end). Perhaps by then I was too immersed in the spare beauty of Japanese expression to enjoy American verbosity and repetition. But it’s worth a read if you are going to Tokyo.

17 thoughts on “Inspired by Miss Happiness and Miss Flower”