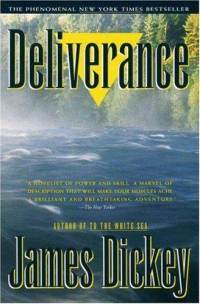 Of all landscape features, it seems to me a river is the one that lends itself best to carrying a narrative, either the whole story (Three Men in a Boat or Deliverance), or departures and episodes that hook the reader like a helpless fish. Think how Dickens starts Our Mutual Friend with Lizzie Hexham and her father rowing along looking for dead bodies in the Thames, and how in Oliver Twist the events leading to Bill Sykes murdering Nancy begin at London Bridge. (The Victorian Web has a fascinating discussion of the setting.) Alice in Wonderland begins on the banks of the river Isis, which is where the real Alice and Lewis Carroll sat as he told the original tales, fortunately over a century before Inspector Morse started fishing bodies out of it. Mole starts the The Wind in the Willows  by falling in, Ratty saves him, and then they just go with the flow.

More grimly The Bridge over the River Kwai was a bestseller, about POWs in the Far East, and competing for grimness is Joseph Conrad’s Heart of Darkness, set in the Congo. Surely it’s no accident that these settings have inspired such successful films.

More books set on or by rivers are discussed here, and picture books here. For older children I’d add two favourites. Black Hearts in Battersea by Joan Aiken is the second in a long series of wonderful adventures.The rightful heir to the throne is rescued from a sinking barge on the Thames by art students in a hot air balloon! Only Joan Aiken could fit so much drama into one chapter – and that isn’t really a spoiler, as there is so much else in the story both before and after that episode.

The second is Laura Ingalls Wilder’s Little House on the Prairie. Her family have to cross a river on a hastily made raft of wooden logs, in their covered wagon drawn by ponies. (Memory says it was the Mississippi, but the book’s gone on a journey of its own so I can’t check.) During the crossing the river rises in a flash flood and the ponies must swim for it. On another occasion the horses pull the wagon across an apparently ice bound lake. Half way across the ice begins to give way…These stories were based on true events of her pioneer childhood.

Unless there’s a drought, a river flows along episodically, with a start and an end (an open end, as it flows into the sea), changing as it moves along, a place of work and pleasure, danger and refreshment. The river at Hiroshima represented salvation to victims of the A Bomb: For my burning body the cold water of the river was as precious as the treasure. Now it’s a calm, serene and beautiful place, with cranes (birds not machines!) and riverside walks. 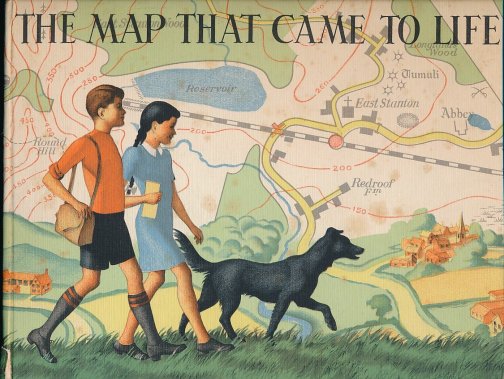 The Map that came to Life sends two children on a walk with a large scale Ordnance Survey map. On the way they cross, encounter, climb and wade through various landscape features and pass significant and domestic buildings. Similarly, in Kyoto, Japan the Kamogawa River came to life as we walked along it and I tell the story in the photos below. It flows between wide sloping green banks. We descended steps to the path beside it, and immediately the roaring traffic was quieter, the air cleaner, and the sky wider. It’s too shallow for boats, but stepping stones led across and we saw them in use. We met a man walking his dog who was delighted I wanted a photo (I think they both were). 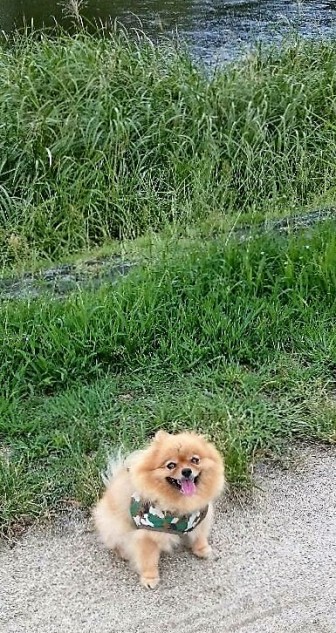 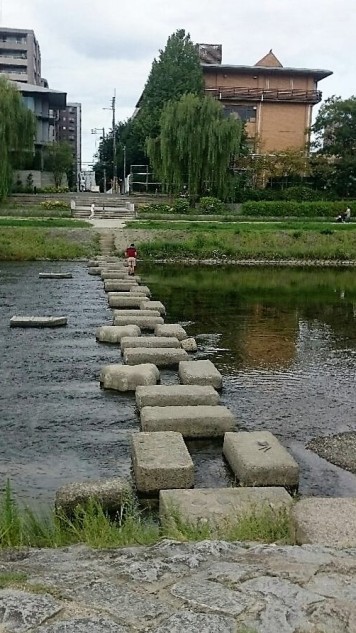 There is only one wooden bridge left among the stone ones, but there were rows of old wooden teahouses, bars and homes, and because Kyoto has  a “no high rise” policy the modern flats were not (too) intrusive. After bowing our thanks to the man with the dog we came to another man doing T’ai Chi, echoing the serenity with his controlled, beautiful movement. By the next bridge a flautist trilled on one bank, playing call and response with a violinist opposite. Herons, very close, swooped to pull gleaming fish from the water and there were butterflies with huge orange wings. A volunteer (I presume) group of elderly Japanese were out weeding and picking up the rare litter, too busy to greet us. On the far bank we saw an artist painting the riverside buildings, his back turned to a second artist… who had set up his easel in the water itself, the bottom edge of the canvas barely above the surface. 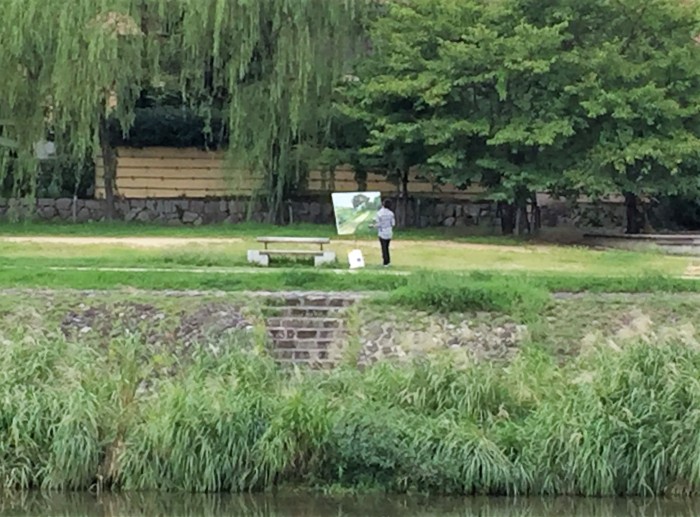 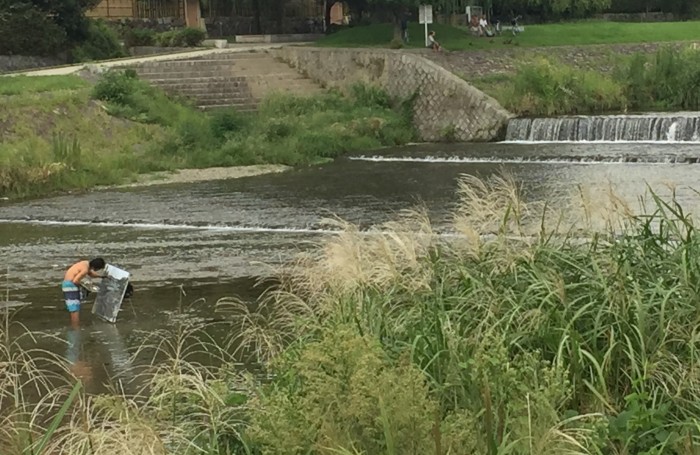 And then we came up the steps, past the tramp with a huge pile of bags in a trolley at the top, and back into the heat and traffic above. We’d been offered an oasis full of characters. Long may their stories continue, and may the river add new ones every day. 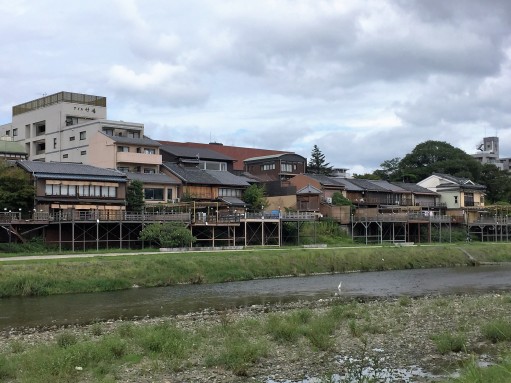 6 thoughts on “Narratives from the riverbank.”